I was recently at a camp where another Guider told me she was planning to run an activity where the girls made cards using recycled security envelopes.  Unfortunately that activity didn’t end up getting run due to time constraints so I don’t know exactly what she had planned but when I got home I googled the idea and I think I may start saving my security envelopes.  Here are some ideas:

I find video to be a useful tool for learning Origami and they can often achieve a better angel then I could demoing it on a table.  This one is pretty easy but takes some precision.

A mocktail is a fancy alcohol-free mixed drink.  They can be a fun way to celebrate or can open a discussion on alcohol use.

The past two weeks my Guides have been finishing up their Design Space badge.  Most of the effort has focused on the Mini-Midway Makers activity, which was selected by the girls working on their Lady BP award as a meeting they wanted to run.  The girls families saved up recycled materials for a week to bring in.  Then the girls divided up the duties of running the meeting.  This included a discussion about who had the loudest voice to make announcements etc.  Due to some time constraints the girls made their Midway games one week and tested them at the next meeting.

The second meeting happened to be a Bring a Parent meeting so the parents helped out testing the games.  Many of the parents commented at how impressed they were with what their girls had made out of the pile of recyclables the parents had helped collect the week before.

We followed testing the midway games by designing and making fidget spinners with a kit we’d bought from a fundraiser run by a travel unit.  I was a little worried about this as the fidget spinner fad has definitely faded but the girls really enjoyed the activity.  And out of the 27 spinners made, not one looked like the others.  There were some really innovative designs tried out which was great to see. It was also fun to see the girls pooling ideas on how to ensure their fidget spinners were symmetrical.

This looks fun and challenging

This weeks meeting my Guides prepared for the 2019 WAGGGS Thinking Day Challenge.  We did the “Get Ready to Time Travel” section on pages 13-14.  First the girls got together in patrols to discuss what it takes to be great time travel team and to develop their personal challenges for next week.  We have this handout for them to keep them on track.

Then we gave each patrol a plastic bottle and put out a variety of old craft supplies to let them build their “time machines”  I’m glad we used the bottles instead of the suggested matchboxes as it gave the girls more room to be creative.  The Guides really got into it, so much so that we didn’t get to the planned team building games.

Next week we will be getting together with the local Pathfinders and Rangers.  The Rangers will be running the stations for the challenge for the younger girls. 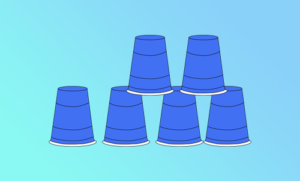 Here is one more offline programming game from Canada Learning Code.  Speed Stacker creates a 6 symbol program language for stacking cups.  One girl acts as the programmer and writes the symbols on a piece of paper, while her partner (who does not know what the finished structure is suppose to look like) tries to follow the instructions to built it.  There is even an extension for turning it into a competitive game once the girls have the hang of it.