I’m putting the blog into hibernation for a few weeks while my family celebrates Christmas and New Years.

Whatever, your family may celebrate this time of year I hope you find joy.

On an unrelated note, if anyone has ideas they would like to share with the Guiding community but they don’t know how or don’t want to start their own blog please get in touch.  One of my goals for 2017 is to find a few guest bloggers for when my own idea pile is running low.  You might just have one idea you want to share or you might have dozens.  Either way, give it some thought.

The WAGGGS/UN Ocean Challenge is a challenge developed jointly between WAGGGS and YUNGA to help youth around the world discover the oceans that cover 70 percent of our world.

All the activities are identified as being suitable for one of three age ranges 5-10, 11-15 or 16+.  The challenge is divided into five parts:

For each section the girls must complete one of the first two challenges and at least one other.  Like the other UN challenges this challenge is a extensive 175 page pdf with lots of graphics, data and information to help you complete the challenge with your unit.

The crests are available from the WAGGGS shop.

Girls sit in a circle. The first girl turns to the second and says, “My Grandmother went to Paris and brought back a  pair of scissors”, making the motions of cutting.  The second girl turns to the third and repeats .  this continues around the circle until all are making cutting motions.  Then the first girl says to the second and says, “My Grandmother wet to Paris and brought back a pairs of scissors (cutting motion) and a fan (fanning motion with other hand).  Continue in this way until you have four or five motions or objects such as: rocking chair (rocking body back and forth), a balloon (blowing motion) etc.

The International Space Station is a great target to look for in the nights sky.  It is relatively bright and moving but not so fast that girls won’t have a chance to pick it out among the stars before it disappears across the horizon.  The Can I see the Space Station from my Backyard? site is mostly a set of links from the Canadian Space Agency to other sites from NASA and the European Space agency but it is still a great place to start if you want to figure out when the ISS may be over head. 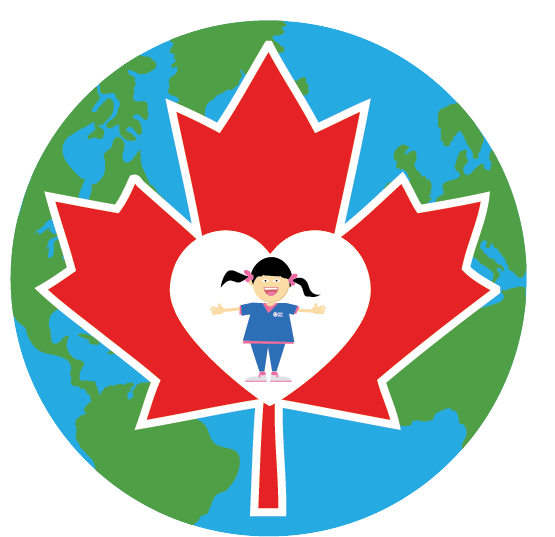 ReACTion is a meeting idea that National has put together partially in response to some of the negative media that has been surrounding us during and since the American Election.  The activities are designed to help girls find their voice on local and global issues.

The two stated goals are:

No matter what the current news stories are, these goals are always needed and I’m sure many units will find the meeting activities useful.

I really like the image they have chosen for this meeting.  It repents the parts of our promise we make to ourselves, our beliefs, Canada and to take action for a better world.

The Species at Risk Challenge is a new challenge from Alberta.  It focuses on Canadian animals at risk. It would be a great extension if you are already working on the Endangered Species badge or the Conservation badge and the girls wanted to learn even more about these issues.

Girls sit in a circle.  A girl who is “The Shopper” walks around and stops before another player and says, “I’m going to Toronto, what shall I buy?”  She then counts to ten and before she is finished counting the girl in front of her must name an object beginning with at “T”.  If she fails then she takes the place of shopper.  The name of the city should be changed often and the name of the things to be bought must begin with the city’s initial.

Variations: This game can also be played using the name of flowers, birds, vegetables etc.  IE “I’m going to Regina, what bird will I see?”

“I will not let anyone walk through my mind with their dirty feet.”
― Attributed to Mahatma Gandhi

A Residential Camp for Guides

Guide Program: This camp should complete the Chemistry badge and/or the Camp Out badge.

Patrols: Start your camp with a sorting ceremony to divide your girls into Houses.  You can use the traditional four houses from the Harry Potter books, the North American school houses, or make up your own.

You could give each house a chance to design a house banner based on their house colour and an animal they pick.

We did the classes as a round robin o activities with 4 stations 20 – 30 minutes at each.

Note: Making slime with borax or laundry starch would fit the theme of these classes too but I can’t recommend it after the Health Canada’s warning about making crafts with Borax.

Magic in Our Friendship
The Gift of Happiness

“We do not need magic to change the world; we carry all the power within ourselves already; we have the power to imagine better…”
– J.K. Rowling

“Magic exists. Who can doubt it, when there are rainbows and wildflowers, the music of the wind and the silence of the stars? Anyone who has loved has been touched by magic. It is such a simple and such an extraordinary part of the lives we live.”
– Nora Roberts

Magic is believing in yourself, if you can do that, you can make anything happen.
– Johann Wolfgang von Goethe

Let the girls imagination determine when they find something

There are lots of ways to incorporate Harry Potter themed food into your camp, here are a few:

Magic
When I was young I thought the stars were made for wishing on
And every hole deep in a tree might hide a leprechaun
Old houses all had secret rooms, if one could find the key
I do believe in magic, I believe.

Chorus:
Magic is the sun that makes a rainbow out of rain
And magic keeps the dream alive to try and try again
Magic is the love that stays when good friends have to leave
I do believe in magic, I believe.

Growing up the grown-ups said someday I’d wake to find
That magic’s just a childhood dream I’d have to leave behind
Like clothes that would no longer fit and toys that I’d ignore
I’d not believe in magic anymore.

When I grew up I learned again, that much to my surprise
Magic did not fade away, it took a new disguise
A child, a friend, a smile, a song, the courage to stand tall
I do believe in magic, after all.

I wish I’d heard about this earlier, however, this sounds like a great initiative by the West Coast Area in British Columbia.  The idea is for units to make simple postcards out of white index cards.  Mail them to a volunteer in the WCA and she will send you back postcards from another unit.  There are also crests you can order to celebrate your participation (free for members of WCA and $1.50 for units else where in the country).